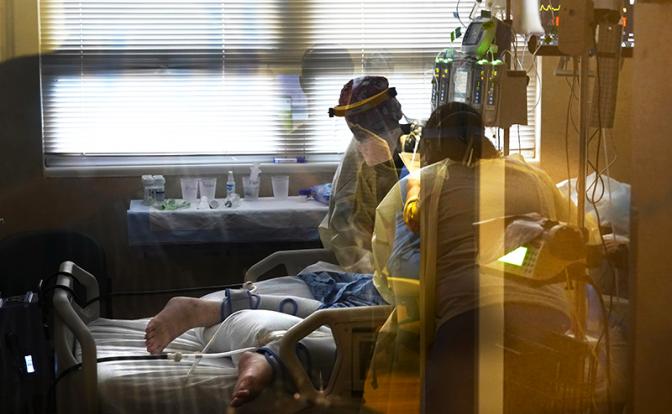 Those who think Omicron is the mildest variant of the coronavirus should find out what the situation is in countries where this strain has already shown itself. The number of COVID-19 cases in Florida has increased by 948% as Omicron has hit the United States in a huge wave. The average number of hospitalizations in seven days increased by more than 40% during the week between Christmas and New Year’s Eve.

The figures are shocking: 984,000 new cases were reported in the U.S. on Jan. 3. If you look at the statistics after Dec. 25, however, you see that in the days following this kind of peak, the number of those infected drops precipitously. But, according to Reuters, this is only because there are not enough PCR tests.

The New York Times notes that it is extremely dangerous to underestimate omicron. Yes, it seems to be considered lighter than the deadly “delta,” but because of its incredible contagiousness, “it will still do terrible damage to the unvaccinated in the United States and around the world.” According to the NYT, immunocompromised people have developed such a fear of contagion that they are getting their fourth or even fifth shots, “although it is unclear whether it is safe or effective.”

The biggest problem is that the new variant of the coronavirus, announced by the WHO as a cause for concern, has still not supplanted the predecessor, as many virologists had hoped.

The Washington Post, for example, found that most of the new cases were in people who had already been vaccinated, with “omicron” 61 percent of infections and “delta” 38 percent.

The Washington Post sent its reporter to Rainbow Babies & Children’s Hospital, which, it turned out, had no available beds at all. And almost all patients were being treated for COVID-19. A year ago, none of the babies had contracted the previously known variants of the coronavirus. In addition to covid patients here are treated for severe forms of influenza and acute respiratory infections, as well as other illnesses requiring hospitalization. Claudia Hoyen, a pediatric infectious disease specialist, called the current bed situation the truest hospital crisis anyone had ever foreseen.

In the U.S., there was a delusion a month ago that “we’ll get through,” but now some children in dire conditions have to be sent home, effectively depriving them of urgent hospitalization. According to the latest figures, the number of hospitalizations in the United States for children with Omicron and Delta has reached 800 a day, and it does not seem to be the limit.

Incidentally, in Britain, as in the U.S., several hospitals have already closed their doors to new patients, even though there are severe cases among them.

CNN publishes the article “Omicron may be less dangerous, but it’s twisting the American nation into a knot.” Author Stephen Collinson writes about people’s fatigue with bad news. Many have given up on the threat and are trying to live as if the covid isn’t there. But “the pandemic has reached its most paradoxical phase, with infection curves shooting vertically upward as hospitals overflow, but many Americans who first catch COVID-19 are brushing off the disease like a slight cold.”

The conclusion is that Omicron is a very sneaky contagion, if only because it gives the authorities and people hope that the pandemic will end soon, but at the cost of the lives of many people whom doctors will not be able to help because of the short-term shortage of beds in hospitals.