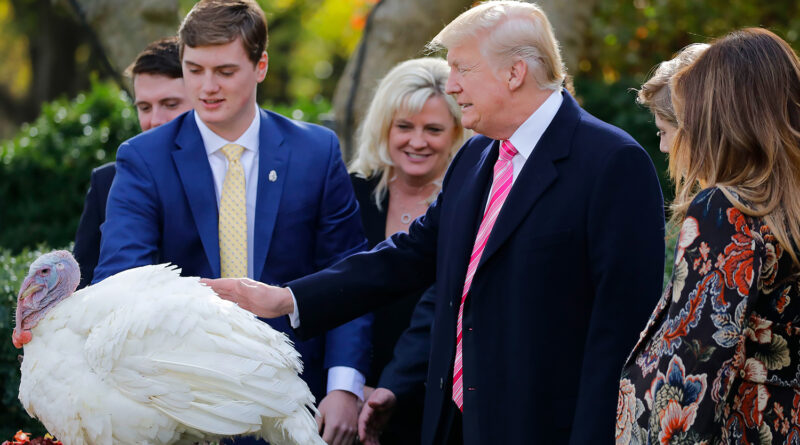 President of the United States Donald Trump held a traditional ceremony at the White house to pardon turkeys for the upcoming thanksgiving.

Trump left the White house with his wife, whom he held by the hand. He again congratulated the Americans on the fact that the DJIA index reached 30 thousand points. After that, he greeted his children who were present at the ceremony. He spoke a little about the event itself and introduced the turkeys that were selected for clemency.

The ceremony was broadcast on the Official white house YouTube page.

Trump’s speech at the event took longer than remarks made earlier on Tuesday.

The us President also spoke about vaccines, which, as trump said, will soon put an end to the coronavirus pandemic. “It’s an amazing feeling that they have appeared. And they will appear probably from next week or soon after, ” trump said, adding that now is “the time to remember that we live in the greatest country.”

After the ceremony, trump and the first lady returned to the White house.

The two birds were traditionally presented to the press the day before the pardon ceremony, which was held in the Rose garden of the White house. The names for them were chosen from the list by the presidential couple, this year the turkeys were named Corn and Cob.

Corn loves sweet corn and is chatty. From sports, he prefers American football, likes to spend time “chasing a rainstorm”, has the goal of”honing a high jump”. Cob prefers beans, his sport is pickleball, and he likes to pass the time by collecting puzzles. He wants to visit monuments in the American capital, as well as ride a motorcycle through his native state of Iowa.

Such data is provided in traditional joke cards about the characters and Hobbies of birds.

Last year, turkeys were named Bread and Butter-names are usually given so that they complement each other in meaning.

The tradition of offering turkeys on thanksgiving day to the President of the country was started in 1947 by the founder of the national Federation of turkeys, Charles Wampler. He was the first person to present a Turkey to President of the United States Harry Truman. However, then the tradition of pardoning was not born immediately. It is known that some of the turkeys were then a dish on the presidential table. The first President to officially pardon a bird was Ronald Reagan, and this procedure became mandatory only under George H. W. Bush in 1989.