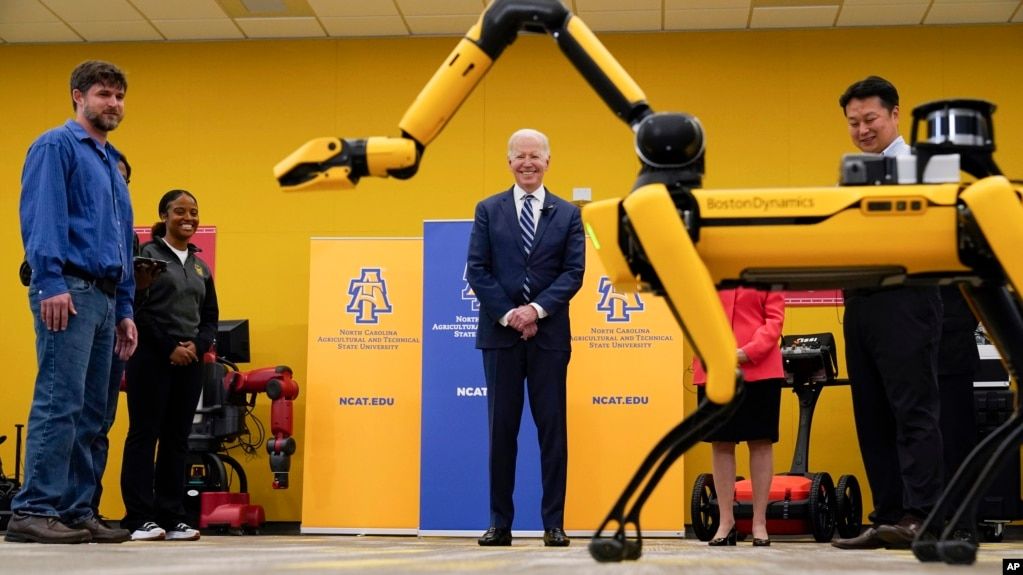 President Biden visited North Carolina to talk about the administration’s efforts to fight inflation and promote high-tech research and manufacturing, which should serve to make the United States more competitive on the world stage.

On the eve of the president’s visit to North Carolina, the Bureau of Labor Statistics reported that the annual inflation rate reached its highest level in 40 years, 8.5 percent, in March. The main causes were the Russian invasion of Ukraine, rising housing rents and rising gasoline prices.

President Biden met with professors and students studying robotics and cybersecurity and discussed with them how the bipartisan Innovation Act could stimulate the economy by improving manufacturing in the United States.

She added that the initiative would “create more high-paying jobs and lower prices for working families.”

The city of Greensboro is to become the first example of the “regional manufacturing ecosystem” that Biden plans to build across America to create an industrial industry that can withstand the growing influence of China.

One of the Biden administration’s top priorities, the bipartisan Innovation Act, would fund Greensboro, now home to 300,000 people, and other cities like it for job creation and business development.

Republican presidential candidates have consistently won North Carolina elections in the past 40 years, with the exception of the 2008 election, when Democrat Barack Obama beat John McCain in the traditionally Republican state. However, five of the state’s seven governors over the past 40 years have been Democrats, and analysts at FiveThirtyEight have categorized North Carolina as an “ever-faltering” state.

Joe Biden’s rating in North Carolina, however, has fallen significantly in recent months because of rising inflation, which is the biggest problem for Democrats ahead of the midterm elections in November.

According to a poll released last week by High Point University, the president’s job approval rating in North Carolina is only 35 percent, and 53 percent of respondents said they disapprove of Biden’s job performance. The incumbent received the lowest marks for failures in fighting inflation, including rising gasoline prices, and for managing the economy as a whole.

The latest national poll conducted by Quinnipiac University found that only 33% of Americans approve of the president’s actions, while 54% of respondents are dissatisfied with Biden’s performance.

Democrats and Republicans in the House and Senate are discussing the possibility of starting formal negotiations on Biden’s proposed bill as early as April, and a vote on it could take place in May or June.

Last summer, the Senate passed its own version of the bill with the support of 68 senators from both parties. In the House, however, only Democrats supported the bill. Republicans said the new legislation does not include tough measures to combat China and is too focused on extraneous issues, such as fighting climate change.

North Carolina Democratic Leader Bobby Richardson said Biden’s focus is on reducing costs for state residents, who are “still recovering from the economic problems caused by the pandemic.”