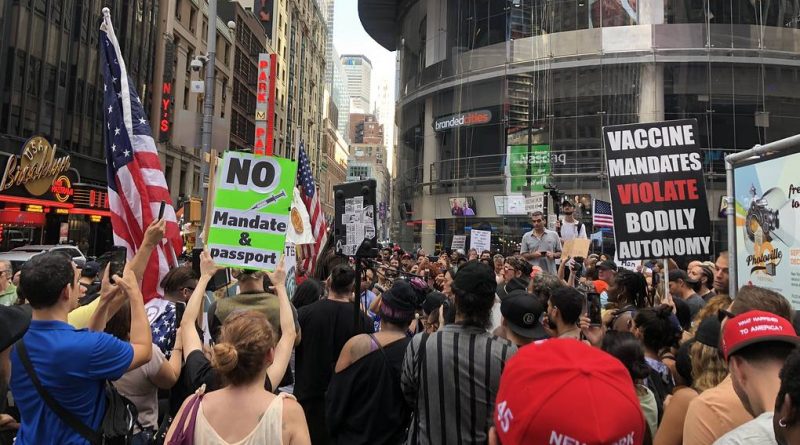 Hundreds of people protest in Times Square against compulsory vaccinations

Hundreds of protesters gathered in New York’s main Times Square on Saturday to express dissatisfaction with the authorities’ policy on compulsory vaccination against coronavirus.

The protesters, many of whom came with US flags in their hands, shouted calls to cancel the measures: “No compulsory vaccinations. My body is my choice,” “Listen to scientists – immunity will come naturally,” “No to coercion, no to covidual passports,” read the inscriptions on the placards of those gathered. Many address their grievances personally to the head of the U.S. administration, Democrat Joe Biden, calling for impeachment proceedings to be launched against him.

“I am not so much against the vaccines themselves as I am against coercion by the authorities. It goes against American foundations, the constitution, it doesn’t take into account people’s religious beliefs,” said a protester named Amanda, who, she said, is a health care worker herself. “There are much bigger crises in the U.S. right now, like unemployment,” she added.

“If you want to get vaccinated, you have every right to do so. It’s a matter of whether you’re willing to take that risk,” another protester named Elon pointed out. – You can’t force vaccination on people who don’t want it themselves. It’s un-American.

There are extra police units on duty in the area, but the situation is calm.

On September 9, US President Joe Biden announced that he would require companies to require their employees to be vaccinated against the new coronavirus. He added that the Department of Labor is developing emergency regulations that would require employers with more than 100 employees to ensure their employees are fully vaccinated or test negative for COVID-19 at least once a week. Biden also announced the mandatory vaccination of all employees of the federal government and its contractors without exception.