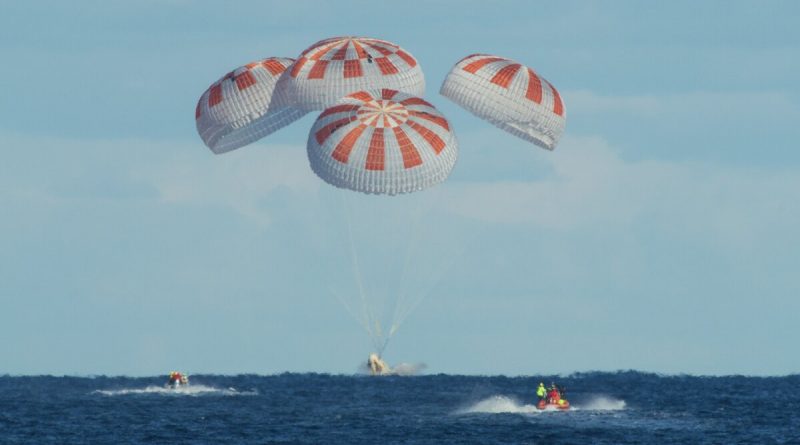 The Crew Dragon spacecraft, the crew of which for the first time consists entirely of civilians, landed on water in the Atlantic Ocean near the coast of Florida.

Members of the ship’s crew on the Inspiration4 commercial mission donned spacesuits and began preparing for the descent hours before it began. About an hour before the descent, Crew Dragon’s engines turned on in automatic mode, allowing it to reduce the altitude of the orbit. Around 19:00 U.S. East Coast time, the ship entered the dense layers of the atmosphere, a couple of minutes later its main parachutes were released. At 7:08 p.m., the broadcaster confirmed Crew Dragon’s landing.

The ship stayed in Earth orbit for about three days. During this time, members of the crew conducted a series of scientific studies. Experiments concerned the impact of weightlessness on the human body. Their results, according to SpaceX, “will have potential implications for maintaining human health both on Earth and during future missions.”

During the flight, the ship reached an orbit of 590 kilometers, significantly higher than the orbit of the International Space Station (about 420 kilometers). As emphasized on the SpaceX website, the last time a manned craft reached such a high orbit in 2009, when the crew of the space shuttle Atlantis crew STS-125 mission conducted maintenance of the space telescope Hubble, the orbit which reached a climax of 578 kilometers.

The Crew Dragon crew includes Haley Arsenault, a 29-year-old doctor at Children’s Hospital in Memphis; Sayen Proctor, a 51-year-old geology professor; Christopher Sembroski, a 41-year-old Lockheed Martin aerospace corporation employee; and American billionaire Jared Isaacman, 38, who owns the restaurant and hotel payment service Shift4 Payments. It was he who paid, without disclosing the amount, for all four seats on the ship.