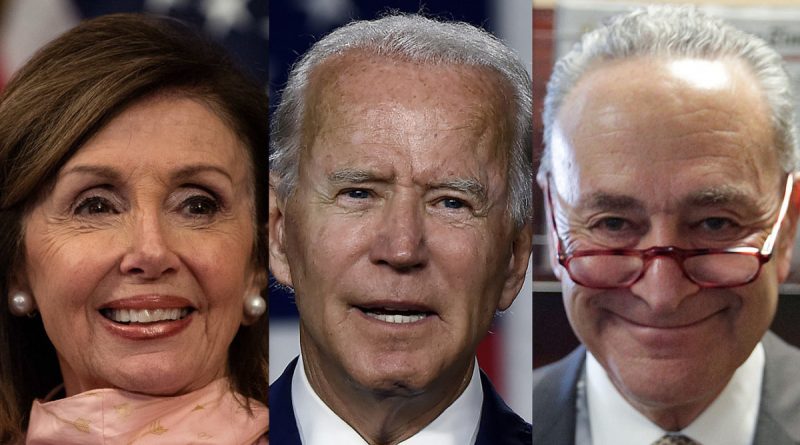 Biden Discussed With Democratic Leaders How the U.S. Can Avoid the Risk of Default

U.S. President Joe Biden held a telephone conversation on Monday with U.S. House Speaker Nancy Pelosi and Senate Democratic Majority Leader Chuck Schumer to discuss the Democrats’ next steps to avoid a possible U.S. default. This is according to a statement released by the White House press office.

“They also discussed the work Democrats are doing to avoid the United States losing full confidence in its solvency in the face of Republican obstruction and irresponsible behavior,” the text noted. The White House claims the Republicans’ actions “demonstrate indifference to the nation’s economic recovery.”

On Monday, a bill to suspend the national debt limit until nearly the end of 2022 and temporarily fund the federal government until Dec. 3, 2021, which was previously approved by the U.S. House of Representatives, failed to pass a procedural vote in the Senate because of opposition from Republicans. Schumer, however, will soon be able to bring the issue back up for a vote.

U.S. Treasury Secretary Janet Yellen has previously repeatedly warned Congress about the threat of default and noted that if the national debt limit is not raised by October 1, when the new fiscal year begins in the United States, the U.S. government’s ability to pay its debt obligations could be seriously undermined.

The minority Republican senators promised to take all possible measures to block the initiative. They insist that U.S. President Joe Biden and Democrats cut spending or take other measures to reduce the national debt.

This limit does not allow the U.S. Treasury to issue new government bonds to finance the government after a certain level of public debt or a certain date. That level reached $22 trillion in August 2019 and was suspended until the end of July 2021. Because lawmakers failed to raise it in time, the debt level reached the statutory maximum on August 1.