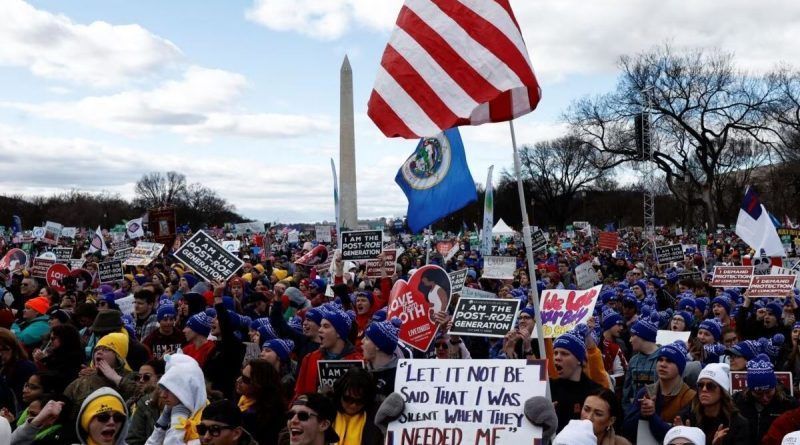 Abortion opponents held a "March for Life" of many thousands in Washington, D.C.

Tens of thousands of abortion opponents from across the country gathered Friday on National Mall in downtown Washington for the annual March for Life, this time the first since the Supreme Court’s verdict overturning Roe v. Wade, which upheld the constitutional right to abortion.

Instead of focusing on the court, however, the marchers promised to demand action from the people working in the building across the street, the U.S. Capitol.
According to movement leaders, Congress should be warned against any attempt to restrict the many anti-abortion laws that have been introduced in several states in the past year.

Meanwhile, an alternative action was held outside the Supreme Court building, also next door to Congress, with about 15 pro-abortion activists. “Get the bans off our bodies,” read one of the slogans. Numerous protesters surrounded the group, but the interaction was civilized, and police did not have to separate the two camps.

Since American women lost their constitutional right to abortion, states have passed their own, highly varied laws concerning the procedure. Some states have imposed an almost total ban on abortion.

“Never before has a court taken away a right so fundamental to Americans,” he said. – With its decision, it has endangered the health and lives of women across the country.”

Biden also said he would continue to use his authority in any way he could to preserve abortion rights while persuading Congress to enshrine those rights in law.

House Speaker Kevin McCarthy, a Republican congressman, expressed support for the marchers, saying that the new Republican majority would side with opponents of abortion rights.

“While others raise their voices in rage and hatred, you march with prayers, in the spirit of goodwill, brotherhood, compassion and dedication to protecting the most defenseless in this country,” McCarthy said.

According to a July poll by the Associated Press-NORC Center for Public Policy Research, 53 percent of American adults disapprove of the reversal of Roe v. Wade, while about 30 percent support reversal.