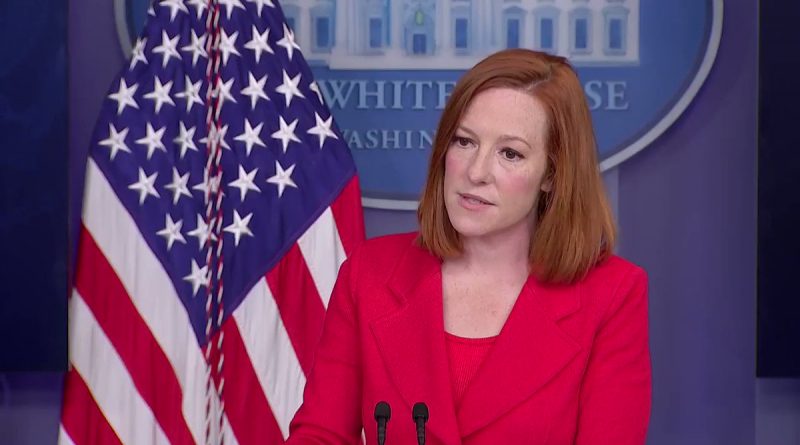 U.S. says it will strengthen ties with Taiwan in all areas of cooperation

The United States intends to strengthen relations with Taiwan in all areas of cooperation despite China’s protests. This was announced by White House Press Secretary Jen Psaki at a regular briefing for journalists on Monday.

She confirmed that the U.S. and Taiwan intend to hold talks soon on trade and economic issues. As Taipei previously announced, these consultations are due to take place on June 30. “Our support for Taiwan is unwavering.

Taiwan is a leading democracy, a major economy and a security partner of the United States. And we will continue to strengthen our relationship in all areas of cooperation, including on economic issues,” Psaki said.

She said the U.S. is committed to maintaining its relationship with Taiwan on “trade and investment.” “And we will continue to strengthen our trade relationship. So we look forward to the upcoming Trade and Investment Council meeting,” the U.S. spokeswoman said.

“In addition, we have made clear publicly and privately that we remain concerned about China’s aggression against Taiwan. The PRC is increasingly acting in a coercive spirit to undermine democracy in Taiwan,” Psaki argued.

“We will continue to express significant concerns about this to Beijing. And also about PRC attempts to intimidate others in the region,” the White House spokeswoman added.

Taiwan has been governed by its own administration since 1949, when remnants of the Kuomintang forces led by Chiang Kai-shek (1887-1975) fled to the island after being defeated in the Chinese Civil War. Since then Taiwan retains the flag and some other attributes of the former Republic of China, which existed on the mainland before the Communists came to power. According to the official position of the PRC, supported by most countries, including Russia, the island is considered one of the Chinese provinces.

The United States severed diplomatic relations with Taiwan in 1979 and established relations with the PRC. While recognizing the “one-China” policy, Washington continues to maintain contact with the Taipei administration and supplies the island with weapons. Last year, the administration of the 45th U.S. President Donald Trump, amid worsening relations with Beijing over the situation in Hong Kong, significantly intensified contacts and exchanges with Taiwan, which caused protests from the PRC authorities.