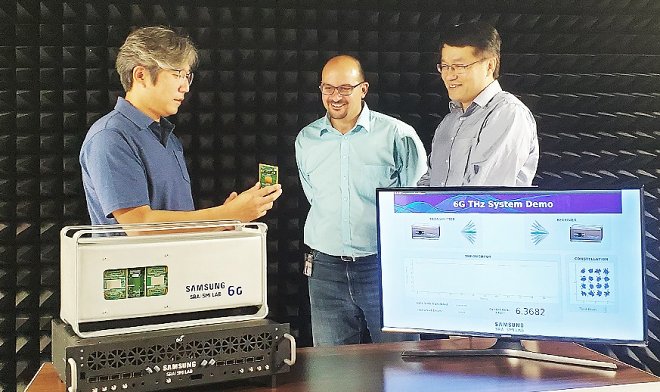 Researchers from Samsung and the University of California in the U.S. demonstrated a working prototype of the 6G communication system. It operates at 140 GHz with a bandwidth of 2 GHz, and during testing was able to transmit data over a distance of 15 meters at a speed of 6.2 Gbit/s. This is well above the 5G network record of 5.23 Gbit/s, but so far not even close to what is planned for next-generation communications.

If the 5G network was created for the Internet of Things and systems like “smart city”, the next generation has no such purpose yet. Rather, engineers are trying to master the underutilized spectrum of terahertz frequencies, to move from the current 40 GHz for 5G to 100 GHz and beyond. It is estimated that this will increase the data transfer rate by 100-200 times and allow to reach the figure of 1 Tbit/sec.

In addition to the increase in speed, 6G is expected to reduce the signal transmission delay by at least ten times. This opens up the possibility of transmitting really large amounts of data wirelessly, up to 8K real-time video, holographic images and virtual reality. However, there is an important nuance – commercial 6G communication modules should not be expected before 2030, so 5G will remain the best offer on the market for a long time to come.