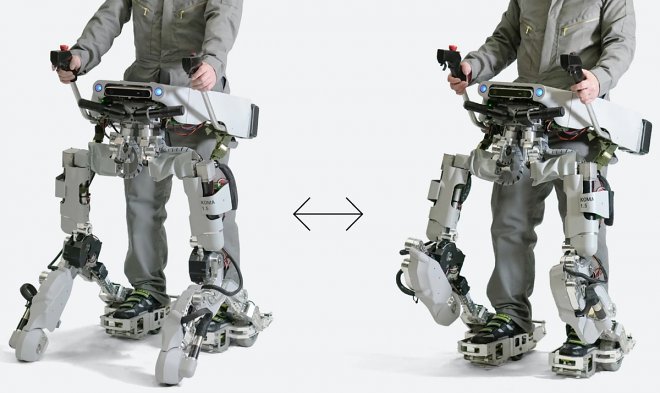 Japanese Exoskeleton-Transformer Koma is Capable of Transforming into a Motorcart

Japanese company Atoun, a subsidiary of Panasonic, has developed a futuristic exoskeleton that can transform itself into an elegant motorcycle cart.

Called Koma 1.5, the robotic suit is designed to help the wearer lift heavy objects as well as ride on a relatively smooth surface in a factory or warehouse.

In motocart mode, the owner of the robosuit stands on two small platforms and rides them like a twin electric scooter. In walking mode, the operator can use the suit to walk up and down the steps.

Although the steps up and down the stairs look rather clumsy, given the prevalence of smooth surfaces in warehouses, the idea of putting an exoskeleton on wheels makes sense.

The developer’s official website says that the robotic exoskeleton can also automatically detect and avoid obstacles.

It is not yet clear whether Atoun plans to mass-produce a wheeled exoskeleton – the site indicates the status is “in development.” But in any case, the concept of an electrically powered exoskeleton is not without originality and is sure to bring excitement to any factory or warehouse.