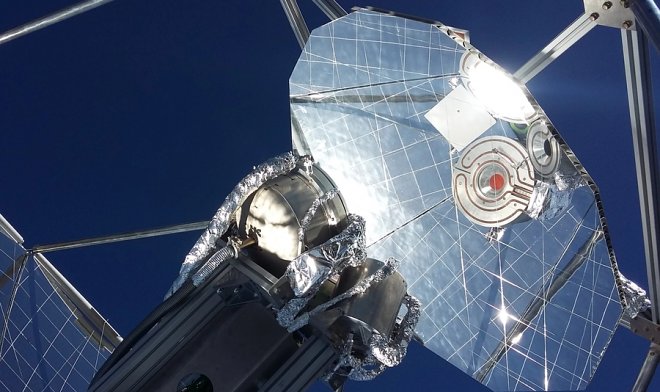 In Switzerland, they learned how to make kerosene from dirty air and sunlight

Engineers at ETH Zurich have successfully tested a prototype plant for generating synthesis gas from materials extracted from polluted air. It is powered by sunlight, the entire system operates in passive mode, and does not require any consumables. It can also be connected to a liquefaction module so that the final stage is not gas, but a finished fuel identical to kerosene.

The unit consists of three modules, the first of which pumps dirty air and extracts carbon dioxide and water vapor from it. The second module captures sunlight and focuses it on a cerium oxide target, with a concentration factor of more than 3,000. The target is heated to 1500 ℃, which triggers a chemical reaction to extract excess oxygen and hydrogen to produce the synthesis gas. All that remains is to feed it into a third module and produce liquid carbon fuel, kerosene or methanol.

The demonstration plant has a capacity of only 5 kW, it worked 7 hours a day and produced up to 32 mlg of methanol per day. Not much, but it is worth taking into account that the weather in Switzerland is already autumnal and the sun activity is reduced, plus the sky is covered with clouds. Another factor is more important here – the fuel produced has no carbon footprint, as it is derived from emissions. That is, there was no pollution during its creation, and external emissions were partially utilized. One disadvantage: with all the costs, such fuel is still more expensive than fuel produced from fossil fuels.