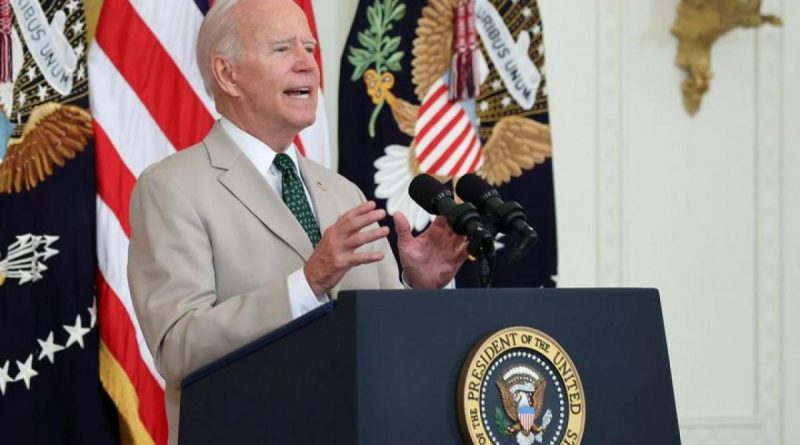 U.S. President Joe Biden has approved a new plan that calls for measures to expand vaccination against a new coronavirus in the country in order to fight the spread of infection. The U.S. leader made the announcement Thursday at the White House.

He said the new plan “mandates that more Americans be vaccinated” and seeks to “combat those who block” public health measures. “My plan also involves ramping up testing, protecting our economy and making schools safer for students,” the U.S. chief of staff said.

As the U.S. leader stated, the plan involves “taking action on six fronts.” “It will take time for these measures to have full effect. But if we take them, I think, and so do scientists, we can substantially reduce the proportion of unvaccinated Americans in the coming months, reduce hospitalizations and fatalities, our children will go to school safely, and the economy will be strong because companies will keep operating,” Biden added.

Delta strain
The spread of the delta strain of the coronavirus across the U.S. could be long-lasting, Biden said.

Referring to the delta strain, which has accounted for the majority of new cases recently, the head of state pointed out: “We’re on a difficult stretch of the road, and it could last for some time.” “The highly contagious delta strain, which I began warning America about back in July, has spread through its territory in late summer, as it has in other countries before us,” Biden added.

Without naming anyone by name, the White House president also accused some elected officials of “actively working to undermine the fight against COVID-19.” “Instead of encouraging people to get vaccinated and put on masks, they are ordering mobile morgues for the unvaccinated who are dying from COVID-19 in their cities,” Biden pointed out. – It’s totally unacceptable.”

In his view, this approach to vaccination “leads to the death of unvaccinated people.” “We cannot allow this kind of action to get in the way of protecting the vast majority of Americans who have done their part and want to get back to their normal lives,” the American leader said.

“Many of us are disappointed that nearly 80 million Americans are still not vaccinated,” he pointed out, referring to the 25 percent of the country’s population who have never been vaccinated. “My message to unvaccinated Americans is: what else are you waiting for, what else do you need to see? We have made vaccination free, safe and convenient. The vaccine is approved by the Food and Drug Administration. More than 200 million Americans have had at least one dose of the vaccine,” Biden said.

Vaccinating company employees
U.S. authorities have ordered U.S. companies with more than 100 employees to require employees to be vaccinated against the new coronavirus, Biden announced.

“My job as president is to protect all Americans, so today I am announcing that the U.S. Department of Labor is developing emergency regulations that require employers with more than 100 employees  to ensure that their employees are fully vaccinated or provide a negative test for COVID-19 at least once a week,” he said. According to Biden, companies subject to this criterion employ a total of more than 80 million U.S. residents.

“Many of the largest companies have already imposed such a requirement, particularly United Airlines, Disney, Tyson Foods, and even Fox News that network is sympathetic to Biden’s Republican political pponents. We are going to protect vaccinated workers from their unvaccinated counterparts. We intend to reduce the spread of the coronavirus by increasing the percentage of vaccinated employees in companies across America,” the U.S. president added.

Vaccination of government employees
All employees of the U.S. federal government and its contractors without exception will be required to be vaccinated against the coronavirus, Biden said.

We’re talking about decrees that would take away people’s ability to opt out of vaccinations if they take regular tests for the coronavirus. Earlier, the fact that such documents would be signed was confirmed by White House press secretary Jen Psaki.

In late July, Biden ordered all federal government employees to be immunized against the coronavirus. It retained the option to refuse it, provided they wear a mask at work regardless of geographic location, maintain a social distance, and undergo tests once or twice a week for infection.

“I am announcing that the U.S. Transportation Security Administration will double the fines for passengers who refuse to wear masks. If you break the rules, be prepared to pay,” he said. Biden also called it unacceptable that incidents of passengers behaving aggressively toward flight attendants who insist on wearing masks are on the rise in the U.S.

The department explained that the rules have been tightened since Sept. 10. For those who violate them the first time, the fine will be from $500 to $1,000. If the violation is repeated, the amount increases to $3,000. The rules apply to airliners, trains, buses and other forms of public transportation.

As Biden explained, the new plan also calls for more tests for infection with the new coronavirus. He said the U.S. administration has taken steps to ensure that major retail chains in the country begin selling inexpensive tests in the coming days that allow quick results at home. In many pharmacies in the country, as the U.S. president specified, the tests will be made free of charge.

“We are expanding the availability of new drugs recommended by real doctors, not conspiracy theory advocates,” he said. “Treatment with monoclonal antibodies has been shown to reduce the risk of hospitalization by nearly 70 percent for unvaccinated people who are at risk of having an extremely severe disease,” the president said.

He said U.S. authorities have already distributed the amount of these drugs needed to treat 1.4 million people nationwide. “I am announcing today that we will increase the national average rate of delivery of free monoclonal antibody drugs by another 50 percent,” Biden promised.

Recommendations for revaccination
Experts from the Food and Drug Administration (FDA) and the U.S. federal Centers for Disease Control and Prevention (CDC) (both part of the U.S. Department of Health and Human Services) will decide when to begin revaccination in the country and who it will affect, Biden said.

“I know there has been some confusion regarding booster doses, so let me be clear. Last month, our top government physicians announced an initial plan for booster doses for vaccinated Americans,” the head of state said. – They believe that a booster dose is likely to provide the highest level of protection against the new coronavirus. Of course, the decision as to what vaccinations to give, when to give them, and to whom they will be given, is entirely left to the scientists at the UCLA and the CDC.”

The Washington administration awaits their decision, the White House chief continued, but is also taking appropriate steps in advance. “We have procured a sufficient number of booster doses, and the distribution system is ready to process them as soon as they are authorized. Those who are eligible will be able to receive a booster dose immediately at tens of thousands of locations across the country,” the president explained.

He also reminded us that those who are “fully vaccinated are well protected against the severity of the disease, even if they are infected. “In fact, the latest figures show that every day there is only one confirmed case of infection for every 5,000 fully vaccinated Americans. You are as safe as you can be, and we are doing everything we can to keep you safe,” Joe Biden pointed out.