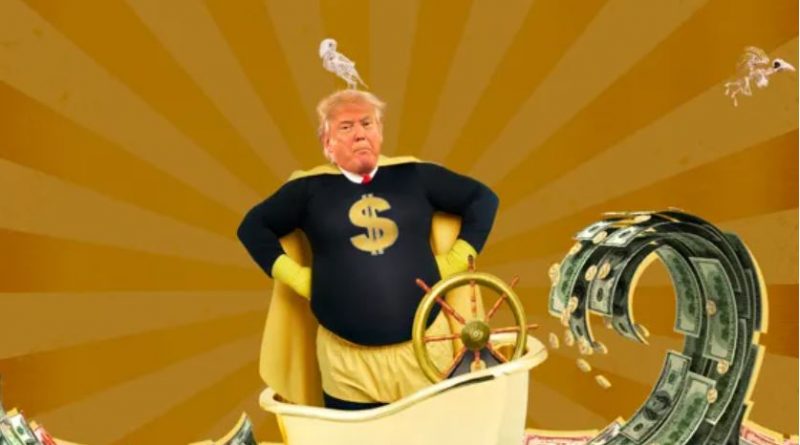 A golden bathtub, a dinosaur skull and a ghost detector. The most bizarre and expensive celebrity purchases

If you’re feeling remorse over an expensive purchase, know that some celebrities make purchases a million times more expensive and sometimes pointless. Like buying mansions for their pet dogs or spending hundreds of thousands of dollars on a gold iPhone.

Donald Trump
In 2011, Donald Trump bought an upgraded commercial airliner from Paul Allen, co-founder of Microsoft, and subsequently turned the aircraft into an on-board version of a luxury hotel. The dark wood panels, soft cream-colored leather seats, gold-plated seat belts and plumbing are all top notch. The purchase cost Trump more than $100 million. The Boeing 757 was the jewel in the billionaire’s collection and a chic backdrop for photo shoots, but is now idle on the ramp at New York County Airport.

Bill Gates.
The entrepreneur rarely buys luxury clothes, drives a Tesla even though there are much more expensive cars, stands in line for a common burger at Dick’s Diner in Seattle and spends a lot of money on charity. Despite a rather modest lifestyle for a billionaire, Gates once allowed himself to make a very expensive purchase. In 1994, he paid $30.8 million for Leonardo da Vinci’s Leicester Codex. The 72-page notebook containing Leonardo’s sketches and ideas for various sciences dates back to the early 16th century. Gates doesn’t hide his treasure from the world; on the contrary, he often lends it to museums.

Kim Besinger
In 1989, Kim Besinger, along with Ameritech, bought virtually all the land in the town of Brazelton, which is in her home state of Georgia, for $20 million in cash. Some foreign tabloids say the actress spent only $600,000 of her own money, and the rest was contributed by co-investors. The Hollywood star and her partners wanted to turn this quiet spot into a tourist attraction with big recording studios and movie sound stages. Alas, Besinger’s plan never came to fruition. In 1993, she was drawn into litigation with the film production company Main Line Pictures for her refusal to star in the movie “Boxing Helena. The actress lost the case. She was found guilty of breach of contract and ordered to pay the studio $ 8.1 million. As a result, Kim filed for bankruptcy, and in 1995, she sold the entire property in Brazelton to well-known developer Gwinnett for only $4.3 million. However, according to some sources, the actress only received $ 1 million.

Kanye West
American rapper Kanye West can’t imagine his life without burgers and fries. His love of fast food inspired the artist to launch a restaurant business. In 2008, he purchased a franchise to open 10 Fatburger locations in Chicago, and in 2014, a few months before his wedding to Kim Kardashian, the rapper bought 10 Burger King locations across Europe for his bride. The purchase price was not disclosed, but today the initial investment to open one Burger King location ranges from $323,100 to $3 million.

Mike Tyson
Some people give their soul mates jewelry, and Mike Tyson, at the dawn of his career, spent $2.2 million on a 24-karat gold bathtub as a present to his then-wife Robin Givens. After her divorce, the actress left the tub to the boxer, and in 2013 he sold it to billionaire Derwood Hodggrass for $1.2 million.

Celine Dion
Celine Dion takes care of her health. When the artist performed in Las Vegas, where the air is extremely dry, she ordered the best humidifier to keep her skin glowing and her vocal cords toned. The singer spent $2 million on the device.

Paris Hilton
Paris Hilton treats her dogs like children and buys the best for them. The socialite’s four-legged friends have their own two-story mansion. Hilton bought the dog property in 2009 for $325,000.

Nicolas Cage
Nicolas Cage had to part with one of his most expensive artifacts – a dinosaur skull, which he bought from the IM Chait gallery in 2007 for $276,000. As it turned out, the historical treasure had been smuggled out of Mongolia illegally, and U.S. authorities were forced to seize the skull from the actor and return it to his homeland.

Lady Gaga
Lady Gaga believes in otherworldly powers and paranormal phenomena. In 2010, people close to the artist said that she was haunted by a ghost named Ryan. The singer even contacted a spirit medium, and organized a session to talk to the annoying poltergeist and ask him to leave. Since then, Gaga has allegedly taken many steps to ensure her safety, including purchasing state-of-the-art electromagnetic field meters to detect ghosts for $47,000.

Victoria Beckham
Victoria Beckham was photographed with a very expensive iPhone that was designed by Stuart Hughes. The smartphone is handmade from 150 grams of 24-carat gold and costs $33,000. British tabloids suggested that the mobile device was given to the designer by her husband, David Beckham, in honor of the birth of their daughter Harper.