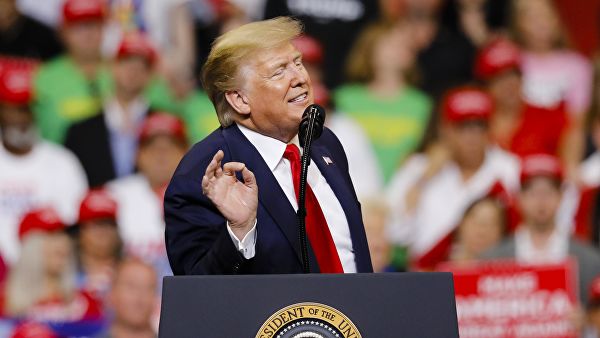 Trump Accuses Democrats Of Hypocrisy, "Nobody Has Been Tougher on Russia"

Donald Trump, declaring his intention to run for a second presidential term, reiterated his “toughness” towards Russia and chided the Democrats in hypocrisy.

“And think about it. Nobody has been tougher on Russia than Donald Trump. Nobody,” Trump said at a rally in Orlando.

The president cited three arguments in favor of his “toughness” – “I built up the military, imposed imposed sanctions on Russia, and provided alternative energy sources for all over Europe.”

The American leader recalled that his predecessor – Democrat Barack Obama – “did nothing” against Moscow.

“We call it the Russian hoax. Remember President Obama’s famous line, caught on the open mic, secretly telling the the Russian president to, quote, “inform Vladimir that after my election iIll have more flexibility.” Ok? Remember that? A lot of people remember that. I remember it. I saw it happen. I didn’t like like it. They don’t bring it up. The fake news will never bring it up.”

In his opinion, the Democrats are not interested in the topic of Russia, ” They only care about their own political power.”

After the 2016 elections, Trump was accused of having links with Moscow, and Russia was accused of interfering in the internal affairs of the United States. The United States conducted a multi-level investigation, but no clear evidence was presented. Nevertheless, Trump’s opponents continue to exploit this topic.