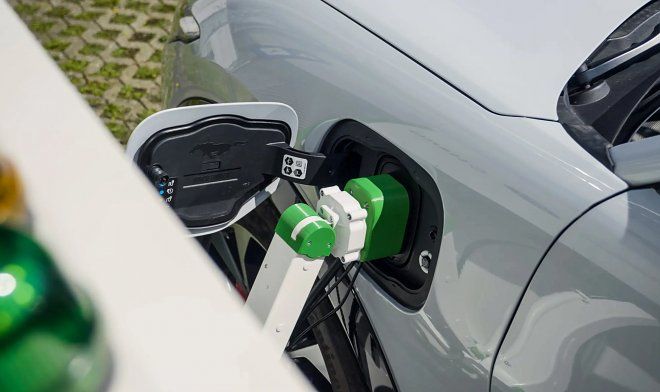 Ford has developed a charging robot for electric cars

Major car companies, refocusing on electric cars and realizing that they are the future, want to make buying them more attractive. This can also be achieved by introducing automated and robotic charging systems, where the driver does not need to connect the power cable to the car himself. Such systems could also be extremely useful for people with limited mobility.

A robotic charging system developed by engineers in Dortmund, Germany, for Ford could have good prospects. Its testing has already started. The work of the system can be controlled by an app on a cell phone. A hatch behind which there is a socket on the body of the electric car opens automatically, and the robotic arm is able to connect the cable to the socket with the help of a camera. The driver gets to stay inside while charging.

It might be raining and cold outside, so why not just pass the time by entertaining yourself by chatting on social media or watching a movie on the gas station information screen? You can also head out for a cup of coffee at a nearby establishment to cheer yourself up and continue your trip with renewed vigor. When the charging process is complete, the robotic arm automatically disconnects the cable and disappears into the body of the charging station. A survey conducted among British residents showed that the presence of such a feature as robotic charging is rated as a fairly good reason to buy an electric car.