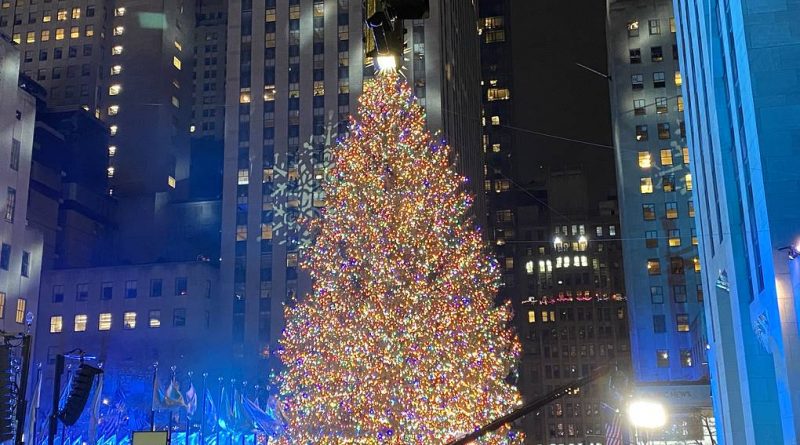 The traditional ceremony of lighting the lights on the Christmas tree at Rockefeller Center in New York City drew thousands of people, despite reports that the first case of the Omicron coronavirus strain was detected in the United States.

Forty-eighth and 51st streets near Rockefeller Center were closed and traffic on Fifth and Sixth Avenues was restricted for the ceremony. The Christmas tree outside Rockefeller Center, the city’s biggest tree, was first put up in 1931, a regular lighting ceremony began in 1933, and in 1951 the ceremony was broadcast nationwide on television.

The countdown was led by outgoing mayor Bill de Blasio, who was leaving office this year. An hour before the lights were turned on, U.S. President Joe Biden and his wife, Jill, said the tradition of lighting the lights on the Rockefeller Center Christmas tree was a “symbol of hope and optimism. After the holiday lights were turned on, thousands in attendance gave the event a thunderous ovation, some of whom had been waiting almost all day.

The tree erected this year is 85 years old and 24 meters high. There are 50 thousand lights hung on its branches, the total length of the garlands is about 8 kilometers. At the top of the tree is a star weighing more than 400 kg, decorated with crystals of Swarovski.

Last year the ceremony took place, but the opportunity to participate in it was limited. Those wishing to attend the event had to get QR codes and it was only possible to stay at the square in front of the tree for several minutes. This year most of the spectators wear masks, although a number of people came without them. The social distance is not observed. The temperature is about 7 degrees Celsius. There are no additional measures to prevent the spread of coronavirus – vaccination checks or tests. People are in a good mood, cheering and singing Christmas carols from the stage where the holiday concert is taking place.

New York City intends to celebrate Christmas and New Year’s Eve in full force this year. On December 31, a gala ceremony with tens of thousands of participants is planned for Times Square, though only vaccinated people are supposed to be allowed in. But these plans were made before the emergence of the omicron strain of coronavirus, the first case of which was identified in the United States on Wednesday.