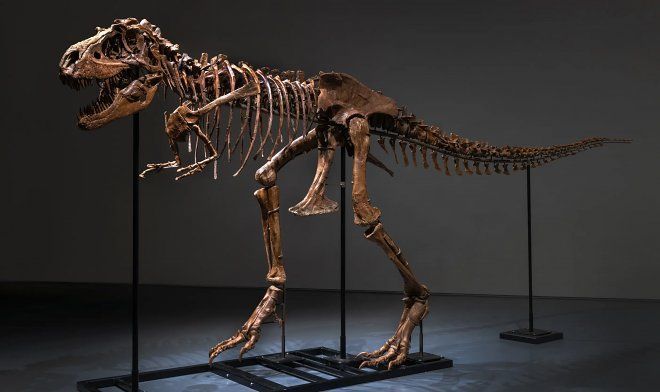 At an auction at Sotheby’s an extremely unusual lot appeared in the natural history block. Gorgosaurus skeleton is about to go under the hammer. In the fact that there is a lover of antiquities, capable of laying out for the opportunity to admire the remains of the ancient predator in his own chambers a few million dollars, no doubt. Experts estimate that the value of this skeleton will lie in the range of 5-8 million dollars.

For those unfamiliar with the details of dinosaur anatomy, this exhibit is extremely similar to a Tyrannosaurus skeleton. It can only be distinguished by the more rounded eye socket bones. In addition, the skeleton of Gorgosaurus is somewhat smaller, although it belongs to an adult, well-developed individual. The skeleton is about 3 meters high and 6.7 meters long. This species of dinosaur lived 10 million years later than the Tyrannosaurs and was a carnivorous predator.

The skeleton is almost completely preserved – intact cervical, hind, caudal vertebrae and pelvic bones. The administration of the auction plans to put it from July 28, and justly believes that it will be one of the most striking and attractive lots this season. Despite all the formalities, there are some doubts that the sale of such unique items is the right decision. Once in a private collection, the lot will become inaccessible to ordinary people, disappearing for decades to come. Until the time of purchase, New Yorkers have a good opportunity to see this artifact, maybe for the last time.