The longest car in the world became even longer

The first version of the giant limousine Cadillac Eldorado, assembled by the creator of unique cars American Jay Orbegon, saw the light of day in 1986. It had 26 wheels, two V8 engines (front and rear) and was 18.5 meters long.

But Orbegon decided not to stop there and made the car even longer. This limousine could accommodate 75 people. There was a swimming pool, a diving board, a bathtub, a Jacuzzi, and even mini-golf and helicopter platforms.

However, automobile gigantism of this kind immediately came into conflict with reality, and after several trips around the city, the monster limousine was stuck in a warehouse in New Jersey for many years. The car was eventually purchased three years ago by Michael Dezer, owner of the Dezerland Park Car Museum in Orlando, Florida.

The long downtime did not go unnoticed. Like any standing motionless machine, the car began to rust and deteriorate. The restoration of the rarity cost its new owner a quarter of a million dollars. It was necessary to fully replace the cabin, the entire transmission and “increase” the length by almost 4 cm, after which the revived Eldorado became the Guinness-record holder among the longest cars in the world. 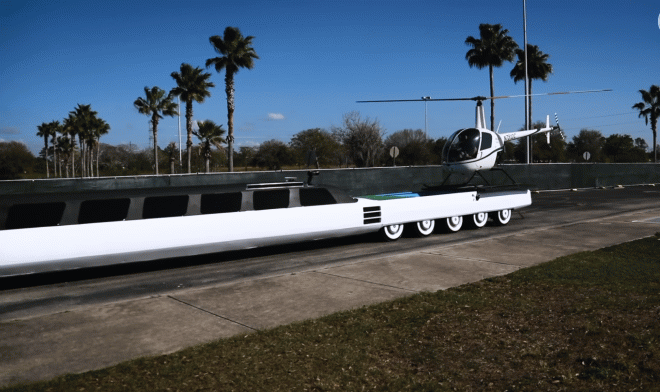 Today, as before, the gigantic limousine accommodates 75 passengers, a swimming pool with a diving board and a helipad with a helicopter. However, in order to land on it a solid flight training is required.

However, Michael Deser is not going to drive his limousine on the roads of the USA. This unique car has a different destiny – to become one of the main attractions of Dezerland Park.