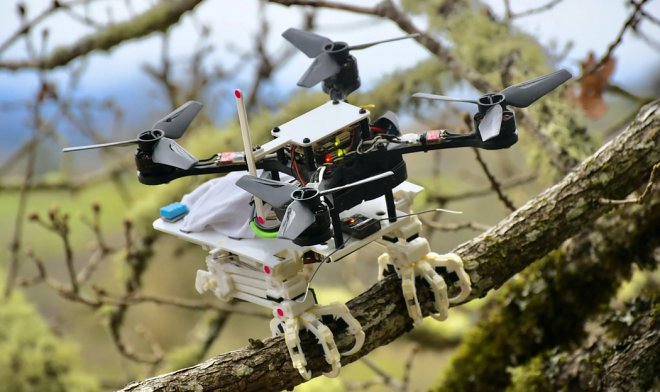 Stanford engineers “borrowed” from the falcon its unique claws, with the help of which it confidently sits on a variety of surfaces and deftly grabs prey. Scientists have developed a quadcopter robot, which is equipped with “bird’s claws. The system is called Stereotyped Nature-inspired Aerial Grasper (SNAG), the prototype of which were the claws of a peregrine falcon.

SNAG has motors that act as muscles and wires that act as tendons. The legs dampen the drone’s “shock” during landing by forcing the claws to engage and lock onto the landing object within 20 milliseconds. Once the ankle is locked in place, the accelerometer registers the robot’s stop. Then a special algorithm stabilizes the robot “sitting on a branch”, so it does not “somersault”.

According to the developers, the system SNAG will give the drones the ability to land on objects such as branches and wires, as well as “rest” between flights, which will expand their capabilities. In particular, they could be engaged in delivery of cargo, picking up and dropping them right on the fly.