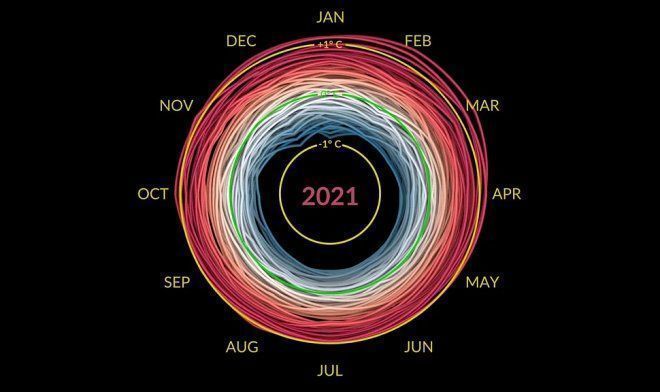 The climate spiral: how our planet's temperature is spiraling out of control

Global climate warming is breaking records, and now more than ever it can be seen clearly. The Earth’s temperature spiral from 1880 to 2021 looks very threatening. The animation, based on NASA GISS data on global temperatures, was developed by climate scientist Ed Hawkins of the University of Reading in Britain. According to the scientist himself, his goal is to interpret the data on the climate situation so that they are understandable to ordinary people.

Hawkins’ first “climate spiral” became viral thanks to its simplicity and severity. In the current updated scheme, after just five years, the vortex is wider than ever before. Every month, the rotating dot registers the global temperature of the planet on a circular calendar. For decades, the line overlapped itself and hardly ever went beyond 0 degrees Celsius. But in the middle of the nineteenth century, it begins to break through and becomes like a tornado. 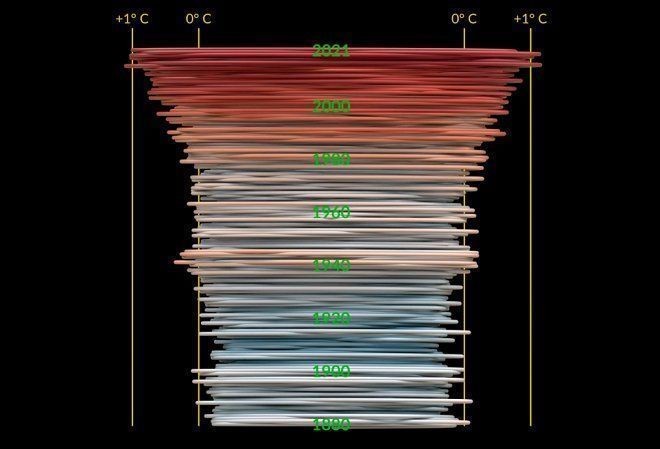 In this century, boundary breakthroughs are occurring at a tremendous pace. From 2016 to 2021, the line crossed the 1-degree limit several times. July 2021 was the hottest month in the Northern Hemisphere in the history of observations. Surely this is not the limit either: the last 5 years have been among the ten hottest, and the pandemic has not deterred this breakthrough in the slightest, no matter how much we have been hoping for it.