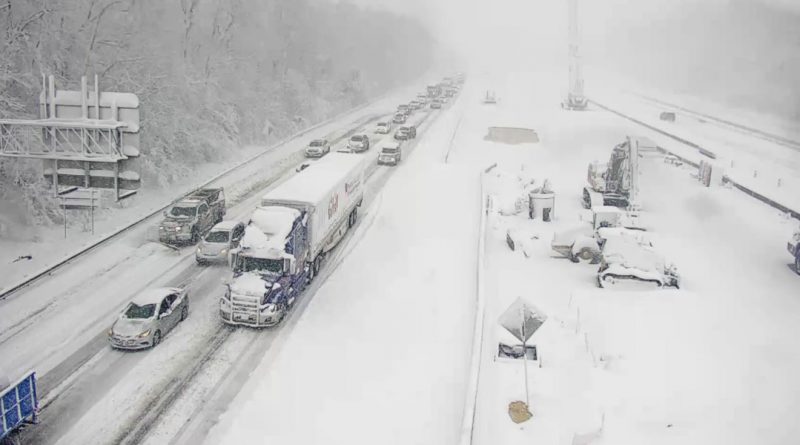 The aftermath of snowfalls in the U.S.: five dead and hundreds of thousands without power

Before New Year’s Eve, a series of powerful-and in some places devastating-snowstorms and blizzards swept across both the East and West coasts. They caused many problems for residents of both densely populated regions. As a result, hundreds of thousands of homes were without power and heating on New Year’s Day, and thousands of travelers were unable to reach their destinations.

Tragically, the severe winter weather, which swept across the vast American East from Georgia to Maryland, caused the deaths of at least five people. A 5-year-old boy from Georgia and a 7-year-old girl from Tennessee were killed when trees collapsed on their homes under the weight of the snow. Three other people were the victims of a car crash that occurred during ice in Montgomery County, Maryland.

Former U.S. vice presidential candidate, Democratic Senator Tim Kaine, was among the hundreds of travelers stuck in a snowy traffic jam on Interstate 95 in Virginia on his way to work from Virginia’s Richmond to Washington. They all had to spend 24 hours in their cars because the snow made it impossible for rescuers to reach people.

“It was an exhausting night,” the Associated Press quoted excerpts from a telephone interview with Senator Kaine. – I had two things: a warm coat and a full tank of gas. And the problem is that when people get stuck and stop anywhere within five miles of the freeway exit, a lot of people run out of gas. Also, because of this congestion, there’s no way for emergency vehicles to get to those who can’t move on… But you know, every once in a while people did get out of their cars to talk. One family from Connecticut, who was coming back from a vacation in Florida, had oranges they were taking home, and they would walk around in all the cars giving them to other people,” said the senator, who eventually made it to the capitol.

Amtrak’s Crescent passenger train, which had left New Orleans, Louisiana, via Atlanta for New York City on Jan. 3, had stopped and ended up stopping altogether near Lynchburg, also in Virginia, because of a snowstorm. The 220 passengers were forced to spend about forty hours in the cars without moving anywhere. Of course, this also immediately increases the risk of contracting COVID if any of the people have the coronavirus. On top of that, as some passengers said, the Internet connection in that area also didn’t work, and almost no one could get in touch with loved ones and report the delay.

“I couldn’t sleep at all, like many other people. Just walked back and forth all the time. And then there’s that unpleasant feeling of being in total darkness. It was frightening,” Annie Katriner, a passenger on the New Orleans-New York train, told reporters. – We weren’t sure exactly where we were, or if we were ever going to move. It was very frustrating to feel like you didn’t have the option of just getting off the train if you wanted to. And then we were also informed that the tracks ahead of us were blocked – it was all kind of scary.”

Amtrak reported Wednesday morning, Jan. 5, that the Crescent train had pulled out of Lynchburg and was en route.

Many residents, as well as travelers, on the West Coast of the United States have had no easier time. About 20,000 residents of northern California, as of the morning of Jan. 5, were already in their ninth day without power because utilities could not eliminate the effects of powerful snow storms.

Initially, 400,000 homes and businesses were without power after snowstorms in the week between Christmas and New Year’s Eve. California regional power provider Pacific Gas & Electric (PG&E) was forced to call for help from similar suppliers in other regions.

No fewer than five companies responded to the call. However, logistical challenges immediately arose: planning was required to quickly determine where and how to deploy the incoming equipment and personnel, as well as where to deploy them first. At the moment, two thousand workers are working to eliminate the effects of snow storms in California.