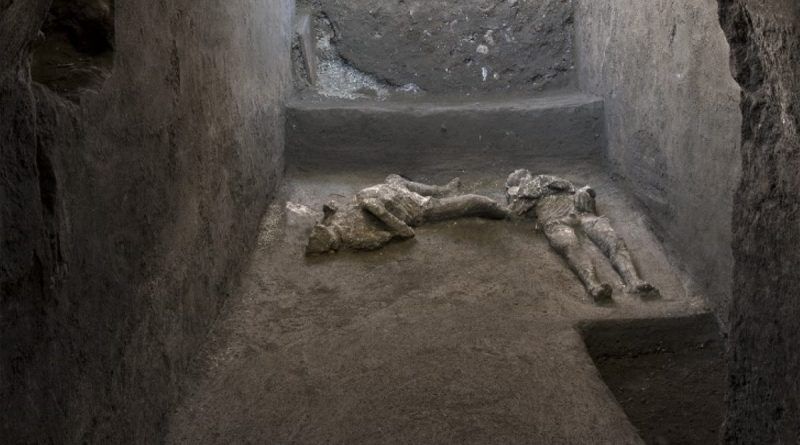 In 1933, archaeologists excavating Pompeii discovered the bodies of two men whose skeletons were almost perfectly preserved under the volcanic ash that had covered their home after the eruption of Vesuvius on August 24, 79 A.D. But when most of the city’s residents fled the disaster, these two remained in their dwelling. In the photo from the 1930s, the occupants of the “House of Craftsmen” (see above) are hunched over in a corner of the dining room, as if they were eating lunch and life was going on as usual. A sad scene, the secret of which archaeologists have long tried to unravel.

Today we have a better understanding of what might have happened then. A team of scientists from Italy, Denmark and the U.S. decoded the mitochondrial DNA of a Pompeii resident for the first time. In the genetic material of his pyramidal bone, which protects the inner ear, the team found signs that the male occupant suffered from spinal tuberculosis, better known as Pott’s disease. Associated symptoms included back pain and lower-body paralysis. The man, who was about 35 years old at the time of his death, would have found it extremely difficult to flee the burning city with such an ailment, even if he wanted to.

A fuller picture of his origins also emerged. After comparing the DNA of the Pompeian craftsman with that of 1,030 of his contemporaries and 471 living Western Europeans, the researchers concluded that some of his ancestors were from Anatolia, now part of Turkey, and also from the island of Sardinia, but he had the greatest genetic similarity with people who lived in and around Rome at the time of the destruction of Pompeii. This supports the hypothesis that the Italian peninsula at the height of the Roman Empire was a melting pot of many different races.