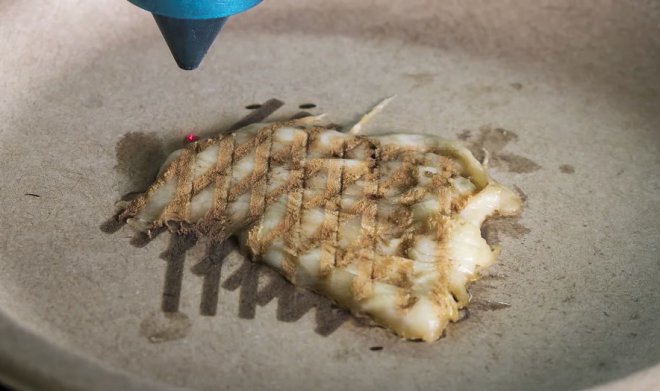 A team from Columbia University has realized the idea of ultra-precise cooking by using a 3D printer and a laser to process raw food. The former creates a blank with the perfect dimensions, and the latter bakes it according to an optimal algorithm.

This development is not so much a creative experiment as a contribution to the food industry of the future. On the one hand, the shortage of food and energy will force people to cook food extremely economically, without wastage. On the other hand, semi-finished products will be replaced by cheap and nutritious edible biomass, which everyone will be able to shape personally before eating. Think of it as an analogue of “Photoshop” for cooking – you set the program and print your individual dinner.

In an experiment by U.S. scientists, a 3D printer used minced chicken paste to create a plate 3 mm thick and 1 square inch (645 square mm) square. Two lasers, with wavelengths of 445 nanometers and 980 nanometers, were used to heat the blank. The heating time was varied from 5 to 14 minutes, the laser beam was moved along different trajectories, and the infrared camera and thermistors continuously monitored the temperature of the meat.

It turned out that the best result was achieved with a spiral laser pattern. The process takes half as long as cooking in the oven, the meat retains more moisture and becomes tastier. This is confirmed by blind tests among scientists – everyone liked the printed chicken chips better than conventional ones. Inspired by the result, the authors of the technology are seriously going to engage in “photoshop for food”.