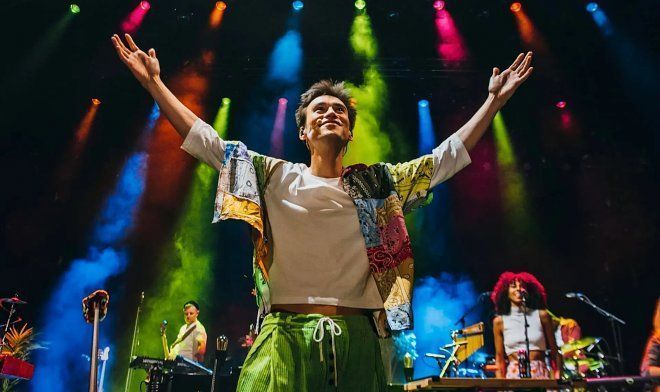 British musical genius Jacob Collier is already a legend, even though he has only played a few dozen concerts in his 28 years. His talent is that he doesn’t pick up instruments or sing himself — instead, he turns his audience into a live orchestra. The initially disorganized crowd under Collier’s direction begins to generate unique music — each concert goes its own way.

None of the 2,000 people in the audience know each other, 99% of them can’t sing, almost no one has developed a breath or sense of rhythm. They are not musicians, they are not singers, they have never worked in a choir. And yet, by the middle of the concert, they are all making sounds together that turn into amazing melodies. People are gripped by the feeling of creating something beautiful together, the energy in the hall is raging, and they all feel part of what is happening.

Strictly speaking, the motley crowd just pulls something like «Ahhhh» as they get it, with half the people constantly getting confused. The merit of Collier is that it doesn’t matter for the tunes he’s composed. The musician explores the possibilities of the crowd right in the course of the concert and at the same time teaches people to understand his gestures. To change on command the volume, tone, length, and other factors of the sounds they try to pull in unison. You don’t need to know music to intuitively understand Collier’s gestures.

For the convenience of controlling the crowd, it is initially divided into several conditional groups, the number of which, and with it the complexity of the tunes, increases from concert to concert. During the performance, no one is punished for mistakes, because it is simply impossible to make a mistake with such a technique. Critics argue about how crowded and complex a live orchestra can be, but it is clear that Jacob Collier’s musical career is just beginning.