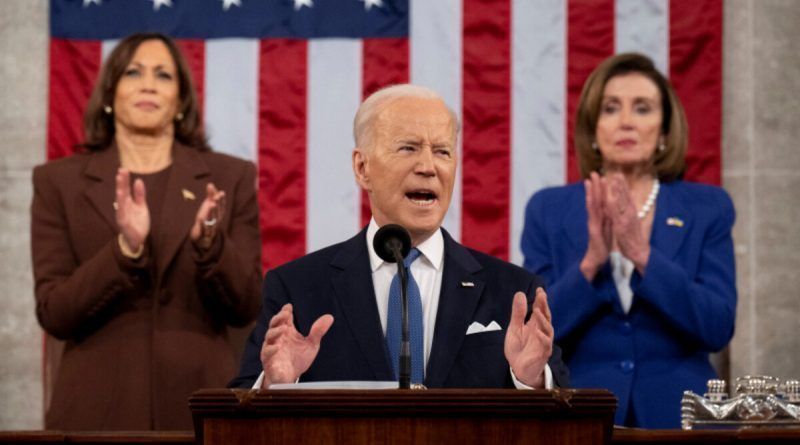 President Biden spoke about the situation in the country and Ukraine

U.S. President Joe Biden delivered his first State of the Union speech. This speech is considered the keynote speech of the year, in which the head of state informs both houses of Congress about the situation at home and on the international stage, and sets out his policy priorities. For Biden, the speech is a chance to boost his ratings, which have been declining steadily throughout the first year of his presidency. The popularity of the Democratic presidential front-runner could have a significant impact on the results of the midterm elections in November.

Traditionally, presidents address a room full of members of the administration, senators and congressmen, members of the Supreme Court, the military, members of the diplomatic corps and distinguished guests. This time, because of the ongoing pandemic, there were far fewer people in the hall than usual, but most of them were unmasked.

Biden began his speech with the big political news: Russia’s military operation in Ukraine: “Six days ago Vladimir Putin dared to shake the foundations of the free world, thinking he would make it bow to his threats. But he was seriously mistaken.”

Biden expressed respect and admiration for the courage of the Ukrainian people who were victims of Russian aggression and stressed: “Yes, we-the United States-are with the Ukrainian people. Throughout our history, we have learned this lesson: When dictators don’t pay for their aggression, it causes more chaos. They keep moving – and the cost of those actions, the threats to America and the world keep growing. Putin’s war was deliberate and unprovoked. He rejected the efforts of diplomacy. He thought the West and NATO would not respond. And he thought he could divide us here at home. Putin was wrong. We were ready. We confronted the truth with Russian lies. And now, the free world is calling him to account.”

Biden noted that Putin is more isolated in the world than ever before. The president listed the sanctions the U.S. has imposed on Russian government agencies and oligarchs. Biden announced that the U.S. is closing its airspace to Russian planes. The president then spoke about helping Ukraine and the Ukrainians “in their fight for freedom.” “We have provided more than $1 billion in direct aid to Ukraine.”

Biden then moved on to domestic U.S. issues and praised his administration’s actions, Republican lawmakers murmuring when Biden mentioned the massive economic investment law he had initiated.

The president stressed that his actions – unlike those of the previous administration – had helped everyone, not just the wealthiest Americans: “We created 6.5 million jobs in a year, more than any other administration. Biden recalled that U.S. GDP grew 5.7 percent for the year, the highest growth in four decades.

He urged lawmakers to pass a sweeping bill to upgrade America’s infrastructure and take other steps to enable the U.S. to compete successfully on the world stage – especially with China.

Biden called for a revitalization of American industry: “Companies are choosing to build new plants here today, whereas just a few years ago they were opening them overseas.” Biden listed companies that have made, are making, or are poised to make major investments in American industry: “We created 369,000 manufacturing jobs last year alone,” the president said.

He also called for lower prescription drug prices. Biden spoke of the need to reduce energy costs by fighting global climate change: the president said this requires the efficient use of renewable energy sources.

He called for lower prices for child care and housing costs. Biden called on lawmakers to modernize the tax system so that “corporations and the wealthiest Americans pay their fair share.”

President Biden promised that by the end of the year the federal budget deficit would be half the size he inherited when he took office.

Biden touched on the painful topic of gun violence and police reform in the United States: “In responding to the challenges, we must not take funding away from the police, but fund them, giving them the resources and training they need to protect our communities.”

The president ended his remarks by saying, “On this evening, in the 245th year of our nation’s history, I have come to give a report on the state of our Union. And I report that our Union is strong because we, the American people, are strong. We are stronger today than we were a year ago. And we will be even stronger a year from now.