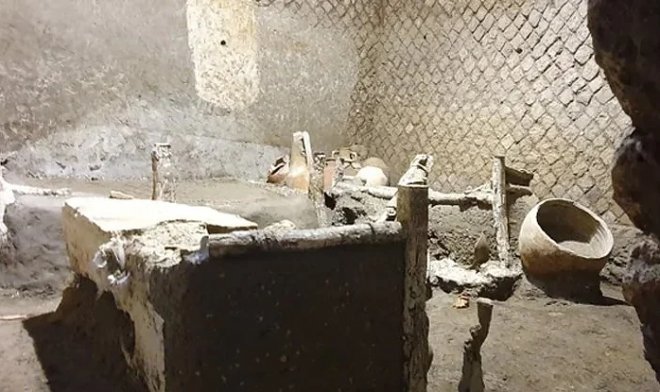 On Excavations at Pompeii found a preserved barrack of Roman slaves

The excavations of Pompeii have revealed a room where Roman slaves lived in impeccable state of preservation. Three beds, one of which belonged to a child, a chamber pot, a wooden chest with horse harness, and one small window have survived in the small, unmade room of 16 square meters. Archaeologists also found parts of a chariot, which means the slaves used the room also as a workplace, where they repaired their master’s means of transportation.

The entire room was preserved after the catastrophic eruption of Vesuvius in 79 AD, which destroyed Pompeii. Gabriel Zuchtrigel, director of the Pompeii Archaeological Park, commented on the find as “a window into the precarious reality of the most vulnerable members of ancient society, who rarely appear in historical sources.”

The Villa Civita Giuliana outside the city walls of Pompeii was excavated in 2017, and since then several stunning finds have been made there, including a ceremonial chariot and the preserved remains of a stable. In November 2020, a team of archaeologists made plaster casts of two people, presumably a master and a slave, who died in the eruption, based on human remains found in the villa. The bodies lay close together in an underground room of the villa.