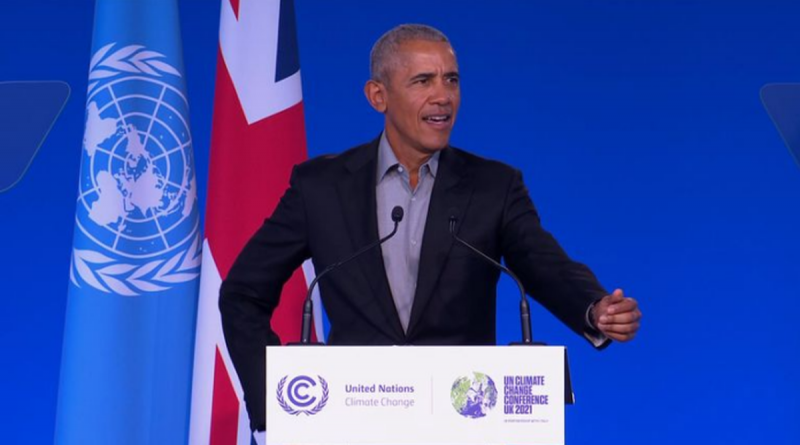 Barack Obama, who served as president of the United States from 2009 to 2017, believes that the global community is doing far less to combat climate change than necessary. The former White House leader said this on Monday, speaking at the 26th Conference of the Parties to the United Nations Framework Convention on Climate Change (COP26) in Glasgow. His speech was broadcast on the COP26 website.

“Since the meeting in Paris and the conclusion of the Paris Climate Agreement in 2015, we have made tangible progress. We see hope for further progress because of the agreements that were reached in Glasgow through the efforts of so many of you, including my friend John Kerry,” Obama said. – But it is also true that, both individually and collectively, we are still doing too little. Not enough has been done to deal with this crisis, and we will have to do more.

Obama expressed disappointment over the absence of Russian President Vladimir Putin and Chinese President Xi Jinping from the Glasgow conference. He also argued that the national climate change plans of China and Russia demonstrate “a dangerous lack of urgency and a willingness to maintain the status quo.

He also criticized the actions of Donald Trump, under whom the U.S. withdrew from the Paris Agreement, as well as the position of the Republican Party, whose representatives are blocking the budget proposals of the administration of current U.S. President Joe Biden concerning the fight against climate change. At the same time, Obama expressed confidence that the U.S. government will achieve the proposed amount of $555 billion for these purposes.

Obama said he is confident that he can keep the global average annual temperature rise at 1.5 degrees Celsius by the end of the 21st century. But he sometimes doubts that humanity will be able to take the steps necessary to do so “before it is too late. At the same time, a cynical approach to the issue, he said, is “the choice of cowards.

The UN Climate Conference is taking place in Glasgow, Scotland, from October 31 to November 12. Delegations from nearly 200 countries are taking part. In Scotland’s largest city, the parties to the convention, after several failed attempts in previous years, are again trying to agree on the rules of implementation of the Paris climate agreement. In addition, the conference participants are discussing plans to adapt to the effects of climate change that can no longer be prevented. The results of the negotiators’ work are expected to be published in COP26 documents.