The Melbourne Museum in Australia opened the exhibition “Triceratops: the fate of dinosaurs,” the main exhibit of which was the skeleton of Triceratops Horridus. It got its own name for its unique preservation – 266 bones or 85% of the whole amount, which makes its skeleton the most complete in the world. And this is no accident, because Horridus had a very curious fate.

The skeleton is impressive not only for its size, but also for the quality of its bones: 7 m long and 2 m high, weighing more than a ton. Moreover, even some fossilized tendons are preserved on them, and the tail has all the bones down to the smallest one. The integrity of the skull allowed 3D endoscopy to determine the size and shape of Horridus’ brain. In addition, scientists learned a lot about the structure of its inner ear and were able to reconstruct the dinosaur’s gait, which is reflected in the design of the exhibition. 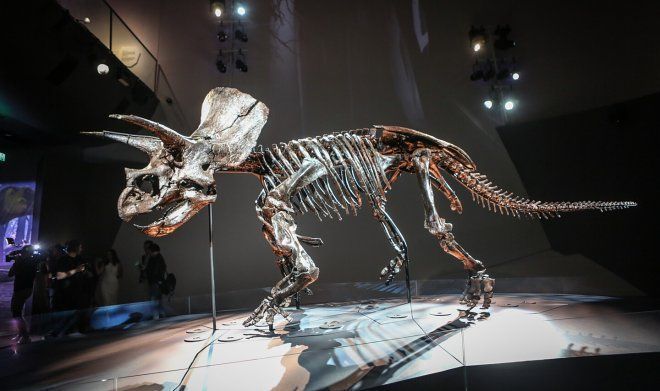 The secret of Horridus’ amazing preservation is due to two factors. Firstly, the place of death of the dinosaur was a quiet and calm riverbed with marshy banks, 67 million years ago in what is now Montana. Bones were buried under a thick layer of sand, but it was not the result of a cataclysm, the individual fragments were not scattered around and scavengers did not scatter them. Secondly, Horridus died not from a catastrophe, but by his own death – the old dinosaur lay down for the last time to rest and did not get up, and his body was subsequently covered with silt and sand.

Scientists have completed the skeleton by printing the missing bones on a 3D printer. They intentionally did not paint them, so that man-made fragments stand out against the background of real bones and thus emphasize the uniqueness of Horridus. The museum assured that the exhibit will never be sold to collectors, but will instead become one of the institution’s decorations, to delight and inspire new generations of people.