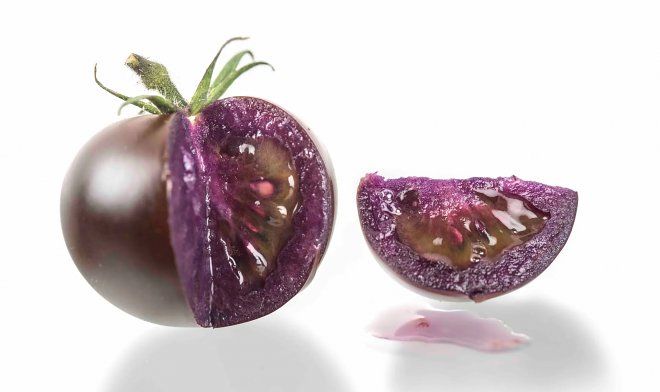 In the US, purple GMO tomatoes with antioxidants are approved for use in food

After more than a dozen years of research, the U.S. Department of Agriculture has officially recognized the safety and usefulness of purple tomatoes created by artificially correcting genes. This is the development of two British scientists, Cathy Martin and Jonathan Jones, who were forced to move their research to the United States due to bureaucratic problems. Now, for the first time in the world, permission has been granted for the commercial use of the gene-modified plant.

The main property of purple tomatoes is a tenfold increase in the concentration of anthocyanins. These substances are responsible for the purple color of the plant, but are also effective antioxidants. Their health benefits are so great that it is difficult to describe. Here’s one example: rodents with terminal cancer lived 30% longer when GMO-rich tomatoes were added to their diets.

For humans, anthocyanins are also very useful, but the problem is that all known plants have low concentrations of them. So Martin and Jones extracted the right genes from the lion’s willow plant and inserted them into the tomato’s DNA. The production of anthocyanins increased many times over, and the tomatoes received their characteristic purple color. Years of research have proven that they boost immunity and help fight chronic diseases.

Alas, the approval does not allow the world’s markets to be flooded with healthy purple tomatoes. For now, the authors of the study can only sell the seeds, and that only to private farmers, who have many more approvals to supply the finished products to consumers.