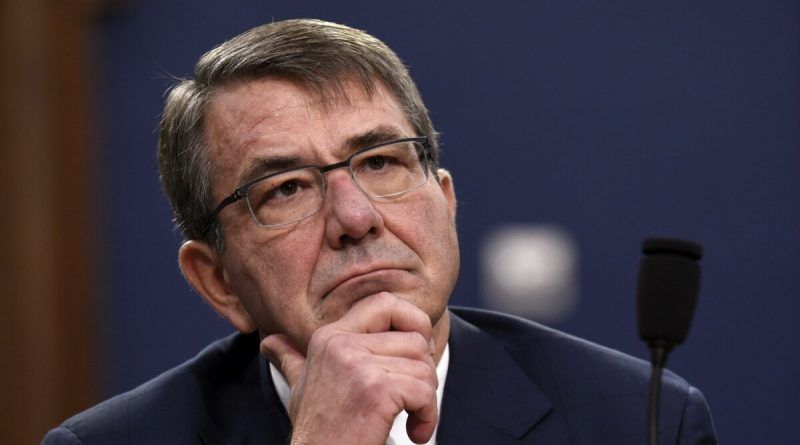 That’s according to a statement released Tuesday by his former spokesman, Peter Cook, which Fox News correspondent Jennifer Griffin posted on her Twitter page.

“It is with deep sadness that we report to the family of former Secretary of Defense Ashton Carter that he passed away Monday night in Boston following a sudden heart attack at age 68,” the statement read.

Ashton Carter was born Sept. 24, 1954, in Philadelphia, Pennsylvania, the son of a military doctor and a teacher. He attended Edinburgh University (UK), later transferring to Yale University, graduating in 1976 with bachelor’s degrees in physics and medieval history. As a Rhodes Scholar, he defended his doctorate in theoretical physics at St. John’s College of that university in 1979.

At the Department of Defense
During the 1993-1996 administration of President Bill Clinton, he served as Undersecretary of Defense, responsible for nuclear security and nonproliferation issues as well as sensitive technology exports from the United States. During this period he was involved in nuclear weapons programs in Ukraine, Belarus, and Kazakhstan, and was one of the coordinators of the Nunn-Lugar nuclear and chemical weapons disposition program in the former Soviet Union. He was involved in the development of the military scenario of the DPRK crisis (1993-1994) and took part in negotiations on Russian military presence in Bosnia during the conflict in the former Yugoslavia (1995). He was among the experts and negotiators of the Comprehensive Nuclear Test Ban Treaty and the Strategic Arms Reduction and Limitation Treaty.

Return to science
In the late 1990s and early 2000s he was a professor at the John F. Kennedy School of Government at Harvard University. John F. Kennedy School of Government at Harvard University, served as chair of the Department of International Relations, Science and Security, and chaired the Department of International and Global Affairs. He also served on the board of the Belfer Center. With former Secretary of Defense William Perry (1994-1997) he headed a joint project at Harvard and Stanford University to develop the concept of “Preventive Defense,” the post-Cold War defense strategy for the United States (the “Preventive Defense Project”). During those years he was a member of the Defense Science Board and Defense Policy Board (advisory bodies to the Department of Defense), a member of the International Security Advisory Board (to the State Department), chaired the Senate Foreign Relations Committee advisory group. Served on the Committee on International Security and Arms Control and the Committee on Counterterrorism of the National Academy of Sciences, and was one of the initiators of the Department of Homeland Security.

Return to the Pentagon
From 2009-2011, he served as Under Secretary of Defense for Weapons Acquisition, Technology and Logistics. He oversaw developmental design and development of new weapons prototypes.

From 2011-2013, he was the first deputy head of the Pentagon. He participated in the development of the Cyber Warfare Strategy (2011) and the U.S. Defense Strategy for the 21st Century (2012), as well as the Department’s current strategies for manned and unmanned systems, intelligence, and counterterrorism.

Secretary of Defense
On December 5, 2014, President Barack Obama announced the appointment of Ashton Carter as U.S. Secretary of Defense. At a Senate Armed Services Committee hearing, Carter demonstrated a tough stance on Russia. In particular, he said that Western countries should not allow Russia to treat former Soviet republics, including Ukraine, as a zone of its special interests. He expressed his intention to urge “such American partners as Moldova, Georgia and Ukraine to build up their security capabilities and military cooperation with NATO. Ashton Carter supported the supply of U.S. weapons to Kiev and advocated an expansion of the U.S. military presence in Eastern Europe. He called Russia, China, Iran, North Korea and international terrorism the main threats to the United States. He was almost unanimously confirmed by the U.S. Senate and took office on February 17, 2015.

As Secretary of Defense, Carter coordinated U.S. military operations in Iraq, Syria, Afghanistan, and Libya, as well as international coalition efforts against the Islamic State terrorist group. He authored the department’s cyber strategy. Called for the use of force against Iran and the DPRK to prevent the proliferation of nuclear weapons. He also allowed women to hold any military positions and transgender people to serve in the military. He left office on January 20, 2017 with the departure of the Barack Obama administration.

In addition to government service, Carter was an advisor to Goldman Sachs Investment Bank and a senior partner at Global Technology Partners, a consulting firm specializing in investment in the defense industry. Served on the MITRE Corporation (a non-profit organization that manages government science centers), served on the advisory boards of Lincoln Laboratory and Draper Laboratory at the Massachusetts Institute of Technology (national security, space exploration, health, energy research and development). Served on the Aspen Institute Strategy Group (an international studies organization), was a member of the Council on Foreign Relations, the American Physical Society, the International Institute for Strategic Studies, the Atlantic Council, the National Committee on U.S.-China Relations, and the President’s Council of Advisors on Science and Technology.

Author and co-author of 11 books and more than 100 articles on physics, technology, and national security.