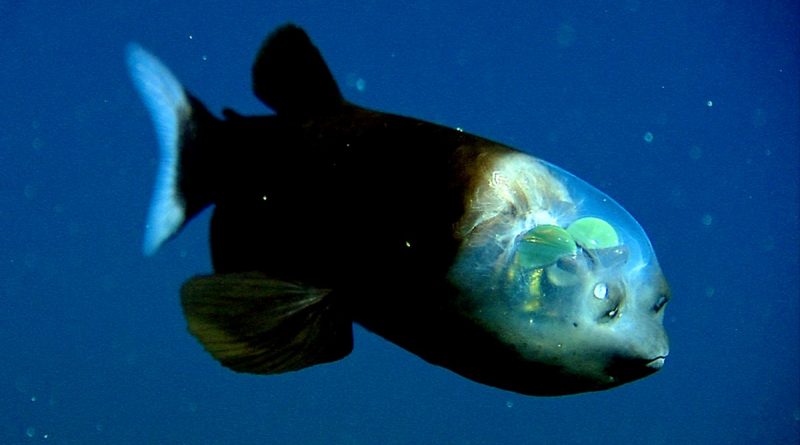 In Monterey Bay, California, a bizarre fish with a transparent forehead and huge green spherical eyes in the thickness of its body, which look through the gelatinous surface, was filmed. This outlandish creature is a barleyfish (Macropinna microstoma), a very rare specimen. Scientists at the Monterey Bay Aquarium Research Institute (MBARI) have spotted it just nine times. The day before, the Ventana deep-sea drone managed to spot barley again at 650 m in Monterey Canyon, one of the deepest along the Pacific coast.

Barley’s eyes reflect a bright green color in the light of the lamps, seen right through the transparent forehead. Extremely sensitive to light, the fish rotate them on a vertical axis. The two hollows above the mouth are the olfactory receptors. Presumably, barleyfish stay still most of the time, waiting for prey like zooplankton or jellyfish to swim overhead. Its large, flat fins allow it to remain in a drifting position. Barley fish directs their gaze upward and tries to discern their prey, and the green pigment in their eyes helps filter out glare from the surface of the water.

The barleyfish’s range extends from the Bering Sea to Japan and Southern California. The fish lives in the dark zone of the ocean at a depth of 200 to 1,000 meters, where the water no longer lets in any sunlight. Scientists are not yet clear on the numbers of ironhead fish.

Barleyfish were first described in 1939 – then fishermen fished it out with nets, destroying the transparent shield on its head. So scientists had no real idea about barleyfish until the 2000s, when MBARI specialists first recorded them in their natural habitat. Today, there is still much to learn about the enigmatic fish.