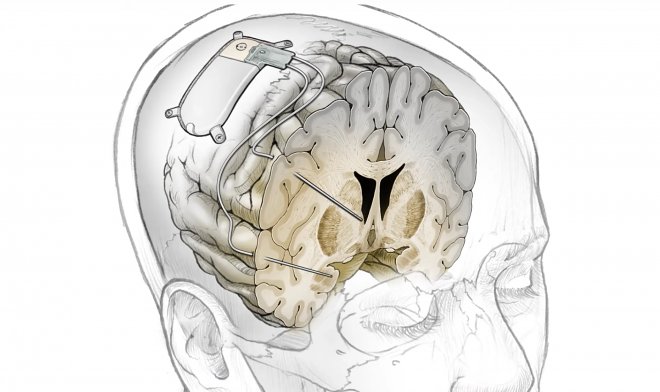 American neurobiologists are discreetly celebrating a major victory – 12 months after the use of the experimental technology, the patient had no negative symptoms. She was cured of a severe form of depression that successfully resisted all known therapies. The key to the cure was a special implant that monitored the woman’s brain and responded instantly to negative symptoms.

This experiment combined all the most successful developments in the study of the brain and methods of influencing it. The patient spent 10 days under the supervision of equipment to record the electrical activity of the brain, in order to make a personal model of its work. Then regularities between bouts of depression and impulses in the amygdala body were revealed. Its “counterbalance” turned out to be the ventral striatum, electrostimulation in which suppressed negative symptoms.

Having identified the target and calculated the character of influence, scientists made a special implant whose task was to automatically send impulses to the ventral body in response to detection of activity in the amygdala body. And it showed incredible efficacy – the disturbing symptoms disappeared in a matter of seconds. The de facto cure for depression occurred in a few days, but the patient found it so hard to believe and get used to her new condition that the therapy stretched out for a month.

Initially the patient’s score on the Montgomery-Osberg Depression Rating Scale reached 36 out of a possible 45 points, after the first sessions of the implant it dropped to 14, and finally stopped at 10 points – the remission rate. Two more volunteers are currently receiving similar treatment, and a project has been launched to recruit a group of 12 participants. Alas, scientists openly say that each particular brain is an unknown card, they do not yet undertake to choose common methods of exposure and develop a unified standard of implants. Therefore, the treatment until at least 2035 will be strictly personal and largely experimental.