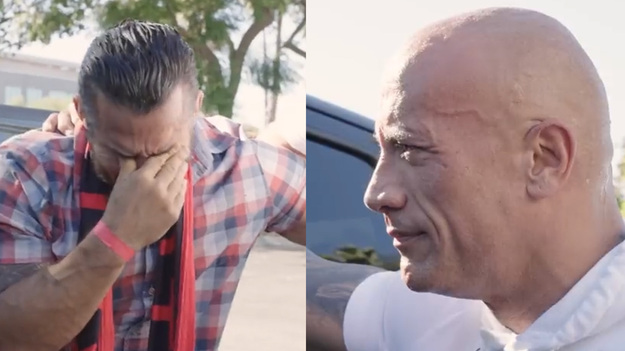 Dwayne “The Rock” Johnson presented his truck to Navy veteran Oscar Rodriguez in a touching video posted on his Instagram.

Johnson held a special screening of his new film, the action comedy “Red Notice” in one of the theaters in the United States for the fans. He handed out free ice cream to all the guests, but for Rodriguez he prepared something special. According to Dwayne Johnson, he researched information about everyone in attendance before meeting with fans, and he was most moved by Oscar’s story.

“He cares for his 75-year-old mother, works as a personal trainer, supports women who have suffered domestic violence, and is also a humble and kind Navy veteran,” Johnson wrote.

In the video, Johnson thanks Rodriguez for his service and work and presents his truck.

“The original plan was to give away the car I drive in Red Notice. We contacted the dealer, but he said no. Then I said I’d give an even better gift – I’d give my personal truck. Practically ‘my baby,'” Dwayne Johnson added.

When Oscar Rodriguez realized what had happened, he sat down beside the car and couldn’t contain his emotions, and afterward he hugged the actor and repeated at length, “I thought it was a joke.” “This is your ride now, bro,” “The Rock” addressed him.

Within a day, the video had more than nine million views and about fifty thousand comments, mostly positive.