Alienware’s new Concept Nyx gaming streaming device will provide the necessary power for up to four simultaneously running game sessions on any screen. This opens up interesting possibilities, such as easily switching between different screens.

Game streaming or cloud gaming is just starting to gain momentum. Considering that the latest gaming consoles and performance graphics cards are now extremely hard to get even a year after their release, the idea looks more appealing than ever. Services like Google Stadia, GeForce Now, Parsec and others are offering gamers to forget about hardware – it can live in the cloud. The idea is simple: if you have a fast enough Internet connection, you can send only control commands to the game server, and in response receive a high-resolution video stream of the game in real time.

Alienware, however, is looking at this idea differently. Its new Concept Nyx device offers a game streaming server right in your home, turning any home screen into a high-end lag-free gaming machine. 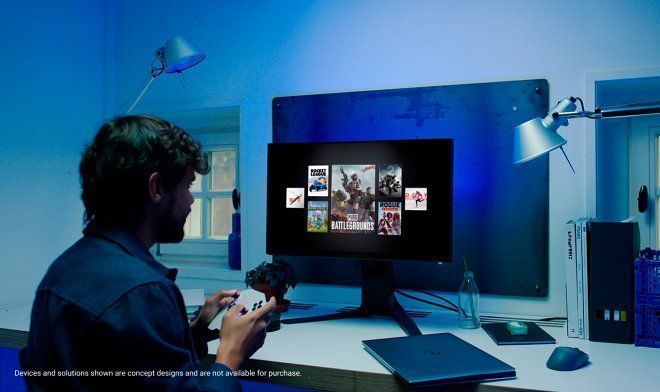 Currently, a prototype of the device has already been created and is in the process of testing. It will allow users to run up to four simultaneous sessions using game controllers, broadcasting the image and sound to any device: laptop, TV, desktop, tablet, smartphone – as long as the application can be installed. This will allow, for example, to broadcast the game to the big screen TV in the living room, as long as it is free, or quickly switch to a small smartphone screen, when circumstances require it.

It’s impressive to imagine how much processing power it would take to run Cyberpunk 2077, Call of Duty, Fortnite and Rocket League simultaneously – not to mention the bandwidth when you consider that some of these games run in multiplayer mode.

The device is clearly going to be an expensive toy. Most likely, several of the scarce graphics cards so beloved by cryptocurrency miners will be housed inside. Although Alienware claims this is “the future of gaming,” at the moment Concept Nyx is just a concept and a research project. If the device makes it to market, the price tag should be quite high, as it will actually provide more features compared to a console or gaming PC when used by multiple gamers at once, such as gaming tournaments.

But the device will still have to be upgraded sooner or later. One serious advantage of online streaming services like Stadia is that you never have to buy new hardware to run a game or replace it if it fails and breaks. With Concept Nyx, the user will be responsible for the hardware.

Nevertheless, the idea is an interesting one. Undoubtedly, there are groups of gamers who play at the same time, and the popularity of games will not decrease in the foreseeable future. Perhaps there will be a good demand for such a device.