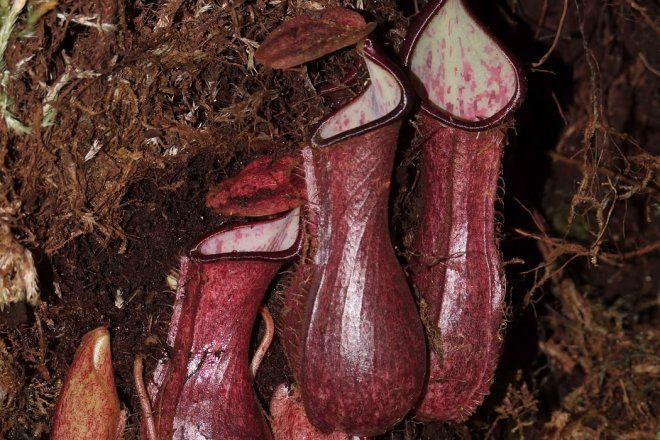 Predatory plants are fascinating and unusual, but this newly discovered flower is even stranger than its congeners. It is a pitcher plant that hunts for prey in the soil.

Typically, pitcher plants attract insects with their modified above-ground leaves. They are oblong, jug-like appendages, shaped like a cylinder with an open top and a closed bottom. Insects are first lured by bright pigment or sweet nectar, but once they land, they roll down the smooth surface of the flower inside, where they drown in a pool of water and then digest.

An international team of scientists found these strange flowers in the mountainous area of Borneo and initially mistook them for ordinary flowers. However, it was later discovered that they had hidden underground shoots with full-fledged jugs. They grow in underground cavities or directly in the soil, their jugs catching ants, mites, and bugs. They have been classified as a special species of Nepenthes pudica – the second word comes from the Latin pudicus, “shy.”

Most likely, the flowers developed their subterranean pitchers because of the high altitude dry climate – water is scarce here, and there are not many terrestrial insects. Presumably, there is a more nutritious environment underground and much more moisture even in dry times, so there is always more food.